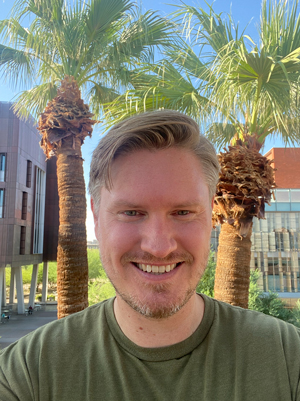 Brent Nannenga is an emerging leader in the fields of protein engineering and structural biology, and an expert in cutting-edge crystallography and cryo-electron microscopy techniques. His work centers on understanding the structure of proteins and small molecules with the aim of engineering improved materials.

Nannenga has been instrumental in developing a technique called microcrystal electron diffraction, or MicroED, which bypasses a technical hurdle in the structural analysis of crystals. For decades, X-ray crystallography depended on the often-difficult task of growing sufficiently large crystals of a purified protein sample. MicroED allows researchers to directly analyze microcrystals, instead of continuing to experiment with conditions that might yield larger ones. Nannenga’s group receives requests to process samples from labs around the world.

Additionally, he has earned national recognition from peers for his work. In 2020, he won the Microscopy Society of America’s Burton Medal, for young researchers in the field of microscopy and microanalysis. He also received the American Crystallographic Association’s Etter Award, an early-career award for crystallographic research. He is an NSF CAREER Award recipient and was named Fulton Outstanding Assistant Professor in Arizona State University’s engineering school in 2018.”

Before joining the ASU faculty in 2015, Nannenga earned his B.S. and M.S. in chemical engineering at that institution. He then went on to earn a Ph.D. at UW, working on protein engineering in the lab of François Baneyx, and to work as a postdoctoral associate at Howard Hughes Medical Institute.

“I found that the environment of the UW was very formative,” says Nannenga. “I had a lot of really good mentors.” He says Baneyx was a huge influence on both how he approaches research problems and mentoring. And he credits UW ChemE’s positive mentoring environment with setting him on the path to professional success. “I definitely would not be where I am now without the many faculty who helped me in different ways,” he says.

UW ChemE established the Early Career Impact Award in 2021 to recognize a graduate within 15 years of receiving their degree who has made significant contributions to engineering in industry, academia, government, or public or volunteer service.