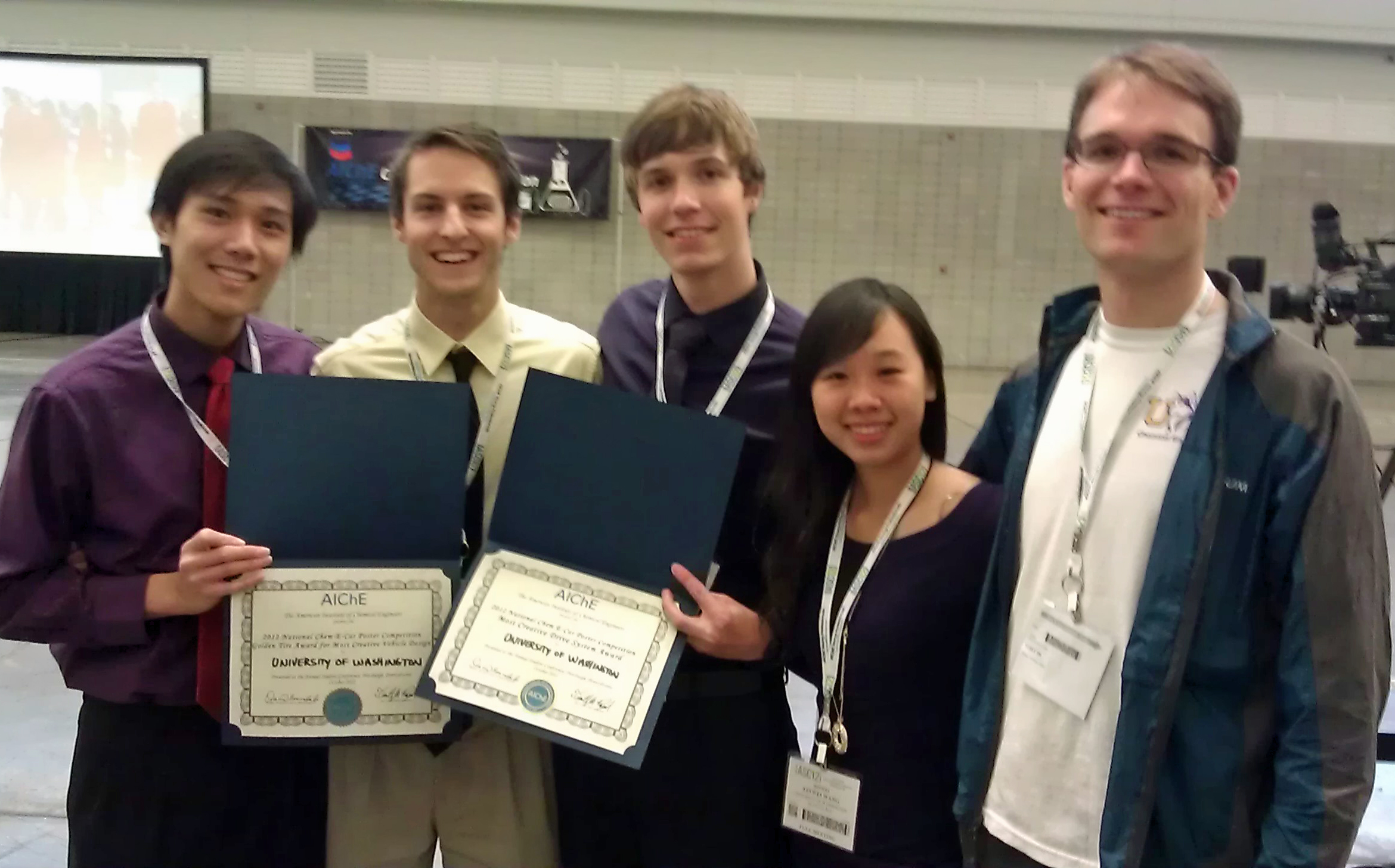 UW undergraduates swept the design-oriented categories at the 2012 AIChE Chem-E- Car competition, held this weekend at the AIChE conference in Pittsburgh. The team earned a place in the Global Finals after they swept the Pacific Northwest Regional AIChE Conference in April.

Thirty-five teams brought their alternatively-powered vehicles from as far away as Qatar to compete in the Global Finals. The competition has two awards for the quality and creativity of the technical work and 3 awards to the top finishers in the vehicle field trials. In just their second year with a team, UW undergrads made it to their first Global Finals and won "Most Creative Drive System Award" and the "Golden Tire Award: Most Creative Vehicle Design” both awards in the quality and creativity of their technical design category.

The UW ChemE team developed a thermoelectrically powered vehicle that extracts electrical energy from a thermal gradient produced by an exothermic reaction (hot-side) and a phase change (cold-side). It was the only vehicle using this power generation mechanism. The students won the award by explaining their design to professional evaluators and other students at a poster presentation prior to the field trials. Next year’s goal? Be the most creative design and win the field trials. Go Huskies!

See the UW Chem-E-Car in action at the AIChE Student Conference Blog.

Senior and ChemE's AIChE student chapter President Kevin Kronvall won the Donald F. & Mildred Topp Othmer National Scholarship Award at the AIChE Student Conference in Pittsburgh. Fifteen students from across the country won the $1,000 scholarship. Awards are presented on the basis of academic achievement and involvement in student chapter activities.

Former senior John Geil placed third in the National AIChE Student Poster competition. John won first place at the Regional contest last spring, earning him a spot in the National competition. His poster was titled “Titania Stabilized Pickering Emulsions for Skin Care Products.” He worked on the project during his senior year under John Berg and in conjunction with Procter and Gamble. Currently, John is employed in the skin care raw materials group at Procter and Gamble.