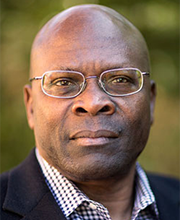 One of Professor Jenekhe's main research interests focuses on electronic, optoelectronic, and photonic phenomena in polymers. Fundamental understanding of these phenomena and the related electroactive and photoactive properties in synthetic polymers is essential to their applications in diverse areas of technology ranging from imaging, photodetectors, batteries, sensors, electrochromic devices, and solar cells to light emitting diodes for flat panel displays. One perennial problem is elucidation of the structural origins of electronic and photonic properties of polymers; another is how to improve or control the efficiencies of the photophysical and charge transport processes. Our general approaches to these problems include the design and synthesis of new polymers, physical and photophysical measurements, structure-property correlations, computational modeling, thin film processing, and polymer device engineering.

Professor Sam Jenekhe is recognized for his influential work on semiconducting polymers for electronic and photovoltaic...