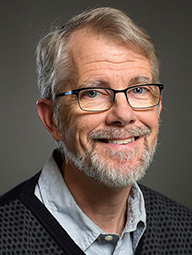 Eric Stuve has published over 70 technical papers in catalytic and electrochemical surface science. He is a member of the American Chemical Society and The Electrochemical Society. He serves on review panels for the National Science Foundation and Department of Energy.

The UWESS Group examines fundamental electrochemical processes occurring at interfaces. These processes relate to surface chemical (electrocatalytic) reactions for fuel cells and electrolysis cells and charge transfer reactions for batteries. Of particular interest are the properties of adsorbed species, reaction mechanism and kinetics, electrocatalyst properties, and the influence of high surface electric field in electrochemical kinetics.

Co-electrolysis of CO2 and H2O is a promising means of both energy storage and reduction of greenhouse gas emissions. This process produces a mixture of CO and H2 (synthesis gas) that can be converted to fuels (gaseous and liquid) or other chemicals. In this project, co-electrolysis is done at high temperature (700–900 °C) in a solid oxide electrolysis cell (SOEC) to provide sufficient kinetics and electrolyte conductivity for the combined reactions. The SOEC incorporates a gadolinium-doped ceria (GDC) cathode, which, by virtue its mixed ionic and electronic conductivity (MIEC), produces a greatly enhanced density of reaction sites, and hence, faster reaction rates.

The overall kinetic response of this co-electrolysis system depends sensitively on the availability of surface reaction sites, as controlled by oxygen ion vacancies at the electrolyte/electrode interface and convoluted with reaction kinetics at the gas/electrode interface. A full examination of electrolyte/electrode/gas effects requires, therefore, electrochemical measurements for analysis of electrolyte/electrode phenomena combined with gas phase kinetics measurements of the electrocatalytic reaction. Both measurements are implemented in this project in the form of linear and non-linear electrochemical impedance spectroscopy (EIS and NLEIS, respectively) coupled with online mass spectrometry (OMS) of gas phase species. In this manner, independent measurements of the electrochemical and electrocatalytic responses can be combined to formulate robust reaction mechanisms and obtain accurate reaction kinetics parameters.

Urea is a widely abundant chemical produced naturally within the nitrogen cycle and industrially from ammonia. The most common application of urea is for fertilizer. Urea is also widely used in the pharmaceutics industry, cosmetics and dermatology, pesticides and herbicides, and control of NOx emissions from diesel engines.

The large demand of fertilizer to support our food supply puts urea at the source of two significant environmental problems: (1) fertilizer run-off from agricultural land into rivers, lakes, and estuaries causes the formation of algae blooms harmful to aquatic life; and (2) unsustainable use of nutrients if the nitrogen present in human and animal waste streams is not recovered for use as fertilizer.

Plant proteins supply animals and humans with the essential element of nitrogen. In the body, proteins break down into amino acids that are catabolized to produce ammonia. The liver converts ammonia to urea, and the kidneys concentrate urea from its serum level of typically 6 mM to approximately 0.3 M in urine. Aside from water, urea is the substance in largest abundance in urine and is the primary means of eliminating excess nitrogen from the body. The body’s ability to eliminate urea can be severely impaired by kidney disease, however. Absent a kidney transplant, dialysis becomes the only means of urea removal, and consequently, the only means of survival. Dialysis is a disruptive and expensive treatment, however, and imparts a low quality of life to those who rely on it.

Urea has intrinsic value as a fuel and is well suited to direct urea fuel cells (DUFC). Its specific and volumetric energy densities of 10.5 MJ/kg and 13.9 MJ/L, respectively, make it more favorable than ammonia (18.5 MJ/kg, 11.5 MJ/L) on a volumetric basis, though less favorable than methanol (20.2 MJ/kg, 16.2 MJ/L) on either basis. Urea can also serve as a hydrogen carrier, with H2 being produced by electrocatalytic means. In comparison with a wide variety of possible fuels and hydrogen carriers (including hydrogen itself), urea alone has the significant advantages of being safe and easy to handle and transport.

Wastewater treatment, urea removal from the body, and electrochemical energy from a direct urea fuel cell all involve electrocatalytic oxidation of urea. Typical electrocatalysts are based on the unique capability of nickel-based electrodes to oxidize urea by shuttling between the Ni2+ and Ni3+ oxidation states. Our work examines the fundamentals of this electrocatalytic reaction: (1) how the nickel catalyst changes as it shuttles between the two oxidation states, (2) the nature of adsorbed urea, (3) improving reaction kinetics with modified electrocatalysts, and (4) avoiding oxygen evolution, which limits the efficiency of urea oxidation and—in fuel cells—the efficiency of electric energy produced.