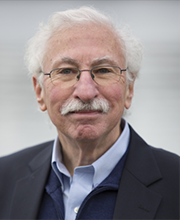 Buddy Ratner is Co-Director of the Center for Dialysis Innovation, Director of the Engineered Biomaterials Engineering Research Center, Michael L. and Myrna Darland Endowed Chair in Technology Commercialization, and Professor in Bioengineering and Chemical Engineering at the University of Washington. He received his PhD from the Polytechnic Institute of Brooklyn. He is an expert in biomaterials used in medical devices and implants, and his lab is working on multiple bioengineering projects for tissues and organs. Dr. Ratner is a fellow and past president of the American Institute of Medical and Biological Engineering (AIMBE), as well as a member of the National Academy of Engineering, the AVS (formerly the American Vacuum Society), and the American Association for the Advancement of Science, among other groups. Dr. Ratner has authored more than 400 scholarly works and has more than 30 issued patents. His numerous awards include the 2014 Lifetime Inventor and Innovator Award from the University of Washington, as well as three honors received in 2015: the Distinguished Service Award from the ACS Division of Polymer Chemistry; the Langmuir Lecture Award from the American Chemical Society; and the Most Cited Paper Award from the Annals of Biomedical Engineering.

Today’s biomaterials and medical devices save lives and improve the quality of life for millions. They are part of a $300 billion industry. However, there are also complications that stem from these devices, often associated with non-physiologic (fibrotic) healing, initiation of inflammation, thrombosis and/or bacterial colonization. The UW Engineered Biomaterials program (an Engineering Research Center, originally funded by the NSF) asks if healing and performance of implanted biomaterials might be engineered to be similar to the healing of normal wounds? To do this, we study the basic biology of wound healing in collaboration with colleagues with expertise in these areas. Then, we, as engineers, translate the basic scientific discoveries into technologies that improve the performance of medical devices.

We engineer new biomaterial surfaces using a wide range of technologies. For example, radio-frequency plasma deposition (a method borrowed from microelectronics) can readily place interesting thin films on existing medical device surfaces. These films can be used in the precision immobilization of key signaling molecules. We also synthesize new polymers that can be biostable, environmentally responsive, biodegradable and/or porous (i.e., scaffolds). The new surfaces and materials made in our laboratory are studied in contact with proteins, blood, living cells and tissues (in vivo and in vitro).

Biomaterial surfaces are the only part of a biomaterial or medical device that is seen by the body. Surfaces present unique analytical problems because of the small mass of material involved (a billionth of a gram of matter per square centimeter is typical). Special instruments are required to study surfaces, and we adapt methods developed in the physics and microelectronics communities to problems in biology and medicine. We use electron spectroscopy for chemical analysis (ESCA), secondary ion mass spectrometry (SIMS), infrared spectroscopy, scanning probe microscopies, surface plasmon resonance and sum frequency generation to observe surface structure and biological interactions.

In 2016, we launched the Center for Dialysis Innovation (CDI). CDI aims to address many of problems in kidney dialysis that shorten the lives of patients including blood compatibility, fibrosis, restenosis, bacterial infection, membrane limitations, etc. I serve as co-director of CDI along with Professor Jonathan Himmelfarb (MD nephrologist).

Ratner is a biomaterials pioneer and a proponent of technology commercialization