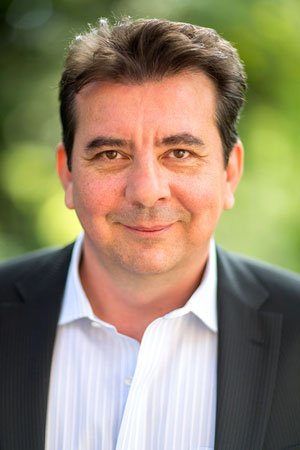 Research in the Baneyx laboratory lies at the intersection of engineering, biology and nanotechnology. Current areas of focus include:

Living organisms fabricate inorganic materials with outstanding mechanical, transport, optical, and magnetic properties. They do so under ambient conditions of temperature and pressure, using biomacromolecules (and especially proteins) to control nucleation, growth, shape, composition, and crystallinity, often in a hierarchical manner and over scales that range from nanometers to millimeters. We seek to emulate and surpass these feats of nature by understanding how combinatorially-selected solid binding peptides (SBPs) interact with inorganic substrates, and by genetically installing such SBPs within the framework of rationally or computationally designed proteins. We use the resulting chimera to control inorganic morphogenesis, endow inorganic nanostructures with biological attributes, and fabricate hybrid architectures with unique functions under sustainable and environmentally friendly conditions. Applications include biosensing and bioimaging, controlled drug delivery, vaccine technology, protein purification, and protein-guided assembly of post-silicon electronics.

Energy transduction at the nanoscale is key for developing ever smaller self-powered biotic-abiotic circuitry. In biological systems, chemical, mechanical, and electromagnetic energy is converted from one form to another using ubiquitous proton gradients. For instance, bacteriorhodopsins harness light energy to pump protons outwards and generate a proton motive force (PMF) across cell membrane, while ATPases exploit inwards proton transport to synthesize ATP from ADP. In collaboration with the Rolandi lab at UCSC, we develop methodologies to directionally integrate such proteins within artificial membranes and onto proton-conducting contacts. We build devices in which proton gradients can be modulated with light and converted into electronic signals and seek to understand and exploit other aspects of bioinspired energy conversion. Applications include sensing, visual prostheses, bionanoelectronics and drug delivery.

Biological building blocks that self-assemble into predetermined supramolecular structures hold promise for the production of advanced materials, devices and systems. However, our ability to predict, engineer and control short- and long-range interactions in proteins is lagging and nature’s most versatile building block remains underused. In collaboration with the Baker lab at UW, we use a family of computationally designed proteins to build 2- and 3D lattices that retain short-range order at the nanoscale but grow over tens to hundreds of micrometers. By controlling the adsorption of these arrays at technological-relevant surfaces through the use of SBPs, we explore their potential as tunable molds for inorganic mineralization and scaffolds for the high- density or controlled display of enzymes and proteins. Applications range from adoptive T cell therapy for cancer treatment to combining enzymatic and heterogeneous catalysis on a single platform.