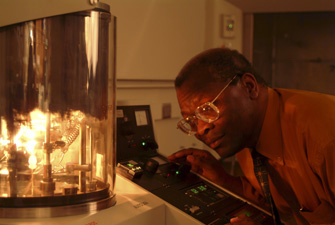 Lidstrom’s research group studies the ability of bacteria to convert many classes of bio-feedstocks to fuels and chemicals. This work involves a new systems-level approach to metabolic networks, to redesign bacterial metabolism for the efficient production of fuels and chemicals, such as converting sugars to propanol and butanol with significantly higher yields than ethanol production.

The IGERT in Bio-Resource Based Energy for Sustainable Societies, lead by Dan Schwartz, examines a number of processes for converting biomass, to practical fuels, such as hydrogen and liquid fuels. An unusual feature of this work is the involvement of Native American tribes (e.g. the Yakama Nation in central Washington) in developing energy conversion for sustainable societies.

Jenekhe’s research group pioneers the development of solar cells based on organic material (polymers) rather than inorganic material (silicon). His group has developed a polymer solar cell, based on self-assembled nano-wires, that gives 3.5% energy conversion, among the highest for organic solar cells.